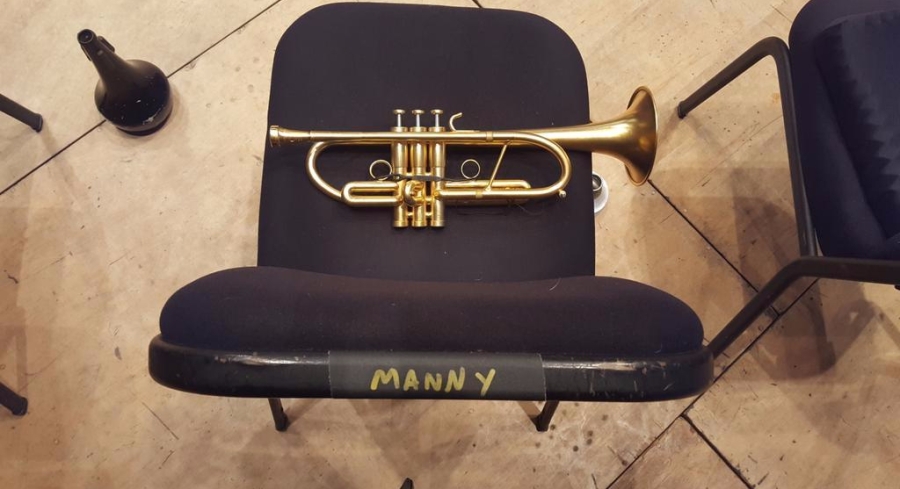 I’m not the tallest guy in the world.

If we were to meet you might not necessarily peg me as particularly short but when you compare me to my other male colleagues in the orchestra as we sit together you’d likely say “He’s not the tallest guy in the world.”

Generally, I have no problem with that. I’m pretty secure about myself in a variety of respects. Being shorter does make me stand up straighter, though. I imagine that’s good for my posture or something and at 62 years of age that’s probably a good thing.  I go to the chiropractor regularly in order to keep my spine from making me shrink more. I take care of myself. The point is this piece isn’t about physical health.

It’s about being able to see and also projecting my sound at work.

Doug Carlsen, our 3rd and assistant principal player, came up with an idea for himself which consisted of four small blocks that are dug out. The space for each block is for a leg of one of the chairs to fit into. When all four blocks are in place it raises you up. He has long legs and he felt cramped, so, he came up with that so that he could breathe properly and play comfortably. Every so often I would use the blocks just so I could be up higher, enabling me to see better.

We have chairs of varying heights. One day I came into work and, after a while, noticed that I was playing in what seemed like a foxhole compared to everyone else. Whoever set the stage that day accidentally gave me a shorter chair. I felt like a 4th grader in a college class. They got me another chair and all was fine. The Tall People enjoyed it.

I decided recently to take advantage of Doug’s blocks. They work fine but are a bit of a pain to implement, as you have to do each one individually and some of the stage crew took notice. They offered to take care of it for me and they often did but, believe it or don’t, they actually would have more important things to attend to and it didn’t always get done. Ah, that’s okay. After 37 years I’m pretty used to it.

Imagine my surprise when I sat down to work about a week or so ago and noticed something was different.

As I often do, I came in to work and draped my leather jacket over the back of my chair before I went back to get my horn and blow a little. Subconsciously, I felt comfortable but, since things feel different every day, I didn’t think about it much. When I was finished I grabbed my coat to go put it away backstage after having deciding I wanted it there instead.

As I lifted my coat I saw my name written on duct tape (by the way, does it bother anyone else that there’s no way of saying those words together properly without sounding like you’re auditioning for a part in a Godfather remake?) on the top of the chair’s back.

Since I have seen other chairs with people’s names on them I realized that I was now a member of that Club of Necessities through the sweetness and consideration of a stage crew that cares about my being comfortable. They remembered that a higher chair had been built for another orchestra member with certain physical needs and, since that player has left, it was available. I sure didn’t know about it.

No more looking for the damned blocks. No more feeling like the 4th grader among adults. No more going to greater efforts to lift the bell, when necessary, than anyone else.

Oh, wait. I do like lifting the bell higher than anyone else. Never mind.

The fact is that I was touched. People cared about something they really didn’t need to think about. Joel Mooney and his crew of good people wanted to make my life a little easier though it means they have another chair to keep track of. It literally was the sweetest thing anyone who wasn’t a musical colleague had ever done for me.

It’s nice to be considered.

3 thoughts on “My Chair”