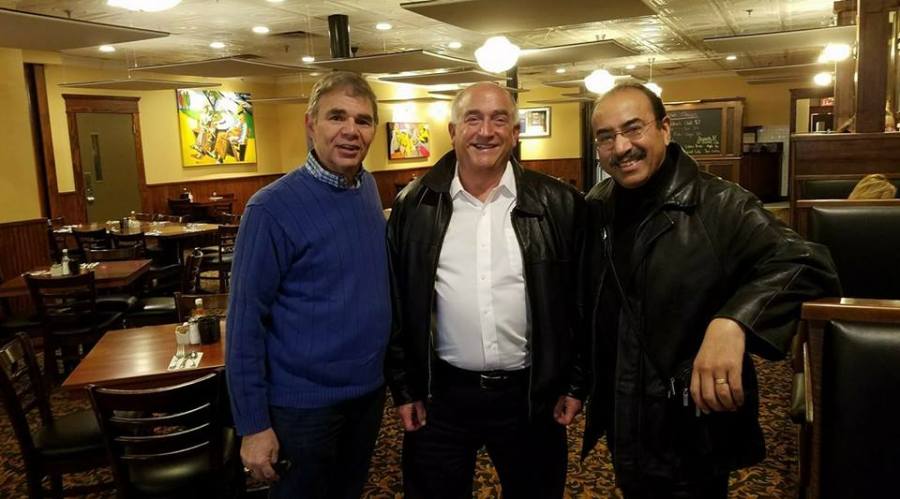 Sweetness comes in many forms when on tour.

One such form is in the person who waits backstage or at the exit to say hello or congratulate you for a good show. They will often be a perfect stranger who wants to take a picture to commemorate the evening or who knows someone you both know. It might be an old student from years ago who wants to catch up with a beer at a local hangout. maybe it will be someone who lives in the venue town who would like to get together. Once in a while the sweetness will take the form of a face you haven’t seen in close to half a century.

I was happy to experience the latter courtesy of a mutual acquaintance who found a way to stay in touch a number of years ago.

Alan Bragin was a trombonist with whom I played at the High School of Music and Art in New York. He graduated a year before I did and was one of those guys that always had a good one-liner that made rehearsals go quicker. Steve Coopersmith was a clarinetist two years my senior with whom I didn’t get to talk much but still remembered because he wasn’t a jerk. He was just a nice guy who did his job and served as an example to sophomores to be a nice guy, to do your job, and not be a jerk.

Al surprised me by telling me that Steve lived in the area and would I like to get together to have breakfast, the three of us. Well, of course I would.

And so, it came to pass that I had a meal filled with the kind of conversation I enjoy: the Catch Up. This particular Catch Up had the distinction of containing more words passing between Steve and myself than we had said to each other in that year of high school we shared. But in the course of the chat we realized we also shared an entire year as colleagues in an organization called All-City High School Orchestra, a place where supposedly the best young musicians in the NYC public school system would gather to play every Saturday morning.

We realized that we had, as a result of being in All-City that year, been involved in a rather amazing event. The concert was to be the final televised event in the organization’s history, although we didn’t know that at the time. What the viewers on the CBS network in NYC saw was the conductor and elder statesman of the New York educational scene, Ben Chancy, come out and and conduct the first movement of Brahms’ second symphony. It was that piece which made me permanently fall in love with classical music, incidentally.

Chancy left the stage after the piece, somewhat hurriedly. We waited for a while in our seats at then-Philharmonic Hall when a gentleman we didn’t recognize appeared from the wings and shouted to the audience “Is there a doctor in the house?” The line was so clichéd that, at first, we laughed to ourselves wondering what would prompt that question to the concert attendees.

Finally, one of our sectional conductors, Jerry Goldstein, came out and continued to conduct the rest of the concert. Being a complete novice, I just thought this is the way things went in a fancy concert like this. When the concert ended we walked off the stage, happy about what we had just done since all had gone well, very well. The first person I bumped into was one of our conductors from Music and Art High School, Bernie Gluckman. Bernie had tears in his eyes and after I greeted him he said simply and sadly “Mr Chancy died.”

Ben Chancy’s last act on this earth was to conduct a bunch of young people in a heralded masterwork, suffer a heart attack, and die on the spot when he walked offstage. We were stunned. In retrospect, it was clear that he had started to feel the initial pangs before the movement was over but… the show went on.
Here’s how the Times reported it.

Our Catch Up continued with stories from our three lives and I left the meeting with another friend to add to the list of fine people I know. Blessed doesn’t begin to describe how fortunate I am to be in this business. It’s why I tell people when they ask me whether I still get excited to play that I still feel like a kid just entering the business. In fact, someone did ask me on this same day but later on.

3 thoughts on “The Show Must Go On (part three)”